It’s time to vote for the Rapid Fired Pizza October Athlete of the Month! Cast your vote for your nominated Aviators athlete, Ryan Davis! 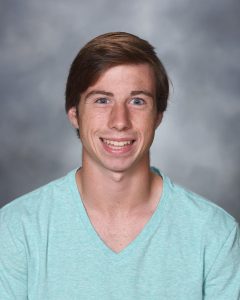 Ryan was named 1st Team All Miami Valley League & a Team Captain for the Aviators.

Click to VOTE NOW! All voters will receive a $5 off $25 coupon on voting submission, courtesy of Rapid Fired Pizza.

See the rest of October’s nominees below:

Kylie Burr is a 10th grade student at West Carrollton High School. Kylie has just finished her second season on the WC Girl’s Golf varsity team. Kylie improved throughout the season. Her drive is wonderful to watch. She also cheers for the high school and is a member of the Youth Leadership Board. Kylie has maintained a 3.5 average while taking honors classes and participating in the extra curricular activities. She is a kind and caring teammate and a perfect example of what an athlete of the month should resemble.

Daisy Sampson – Northmont – Volleyball
Daisy Leads the GWOC with 433 digs. She broke the Northmont career record for most digs that has been held since 2004. She has 1115 digs in her high school career. Daisy is a 2nd year Captain for her volleyball team and she is a member of the student athlete leadership team at Northmont High School. Daisy represents her school as a scholar athlete with a 3.45 GPA.

Lily Reidy – Northmont – Volleyball
Lily leads the GWOC in kills with 236. She is 4th in aces with 42, 6th in digs with 192 and 11th in blocks with 32. Lily is an all-around outstanding volleyball player. This month Lily had 16 kills to defeat Sidney and Springfield, 11 kills to defeat Springboro, 23 kills to defeat Graham and 13 kills to defeat Butler. Lily represents Northmont as a scholar athlete with a 3.95 GPA.

Krystal Anda – Wayne – Volleyball
Krystal was Wayne’s main setter for the Varsity squad, and filled in at libero for a time when their starting libero was unavailable. Even as a setter she was 15th in digs for all of GWOC, and 13th in Assists. She is a 3rd year Varsity player, and a 2nd year Varsity captain. Outside the court she is a scholar athlete, taking multiple college classes while also serving as the president of NHS and holding down a part time job to pay for her own bills.

Lucas Eisele – West Carrollton – Cross Country
Lucas has dropped over 2 minutes from his 5K time this season. He is our district’s #1 runner as a sophomore, and he is humble and dedicated to improving and pushing himself daily at practice. He is currently ranked #1 in the MVL’s Valley Division, and #30 all-league with a 5K time of 17:50.3.

Daniel Dominique – Brookville – Football
Daniel had 474 Receiving Yards on the Season including 102 in last week’s victory over Monroe.

Cory Reese – Miamisburg – Cross Country
Senior Corey Reese has found success on nearly every cross country race he’s lined up for this fall. In seven races he has finished in the top 5 six times. His lone non-top 5 finish is an 8th place finish at the very competitive Mason Invitational back in the beginning of September. Highlights include a win back in August at the Springboro Opening Day Invitational and a Season Best time of 16:08 to finish 2nd at the Centerville Saturday Night Lights race. As Championship Season approaches, Corey hopes to continue to expand his impressive resume with the ultimate goal of qualifying to the State Championships by finishing in the top 20 at the Regional Championships on October 26th.

Brendan Siehl – Northmont – Golf
Brendan was named to the GWOC first team for varsity boys golf. He was also named to the GWOC all-conference team in 2019. Brendan almost single-handedly led his team to the District Tournament after posting 78 in the Sectional Tournament. He followed that up with a team-best performance of 80 at the District tournament in on 10-8-19.

Jacob Padilla – Wayne – Football
He is a 2 sport athlete football & wrestler a four year starter in football, State heavyweight champion in wrestling. Jacob is a great leader on and off the field as a student Athlete also have a GPA of 3.5. We would be honored to have him as our Wayne Student Athlete of the Month !!